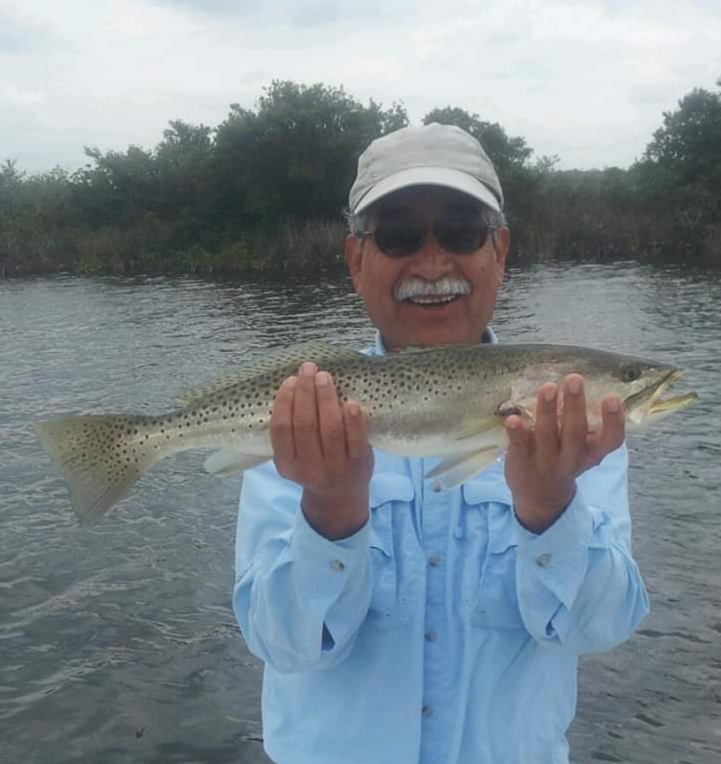 So today was another day that proves fishermen are much better meteorologists than any weatherman on TV. The weather for Saturday was supposed to be beautiful until the afternoon, and I had two trips today to boot. I figured the first one would be fine but the second one might be iffy, but as I dropped the boat in the water I could feel the heavy air and moist breeze already, and I knew I would be re-planning my day on the fly. Sure enough, as soon as it started to break dawn you could see the dark skies already approaching from the NW. Luckily bait was fairly easy and I was able to load the well with enough bait for both trips in about an hour, a vast improvement over the rest of the week. However, by the time I was done rinsing off the boat I could hear the rumbles of thunder in the distance, we still had some sunlight as my morning charter arrived so we decided to give it a go. I decided to run north to a channel edge that had some nice trout on it and if the rain got to us we would be running south to safety. I guess you can’t blame the weatherman too much at least he got the day right for the rain, but he was 7 hours off! Once we arrived the skies were starting to get very dark, we put out the baits and the trout hit immediately. We put a few in the boat pretty quickly, but the skies were looking very ominous. We started to get some light rain, but my crew was troopers and decided to fish on, unfortunately, it was only the beginning of a lot more rain. We ran south toward lighter skies and decided to give a jetty off of Tarpon Springs a try, we were able to get south of the rain but the thunder was still banging and we knew our time was short. We got set up and had a few nice hits, but we could literally see a wall of water coming our way and the flash of lighting with it. We decided not to test Mother Nature and to the dock we went. 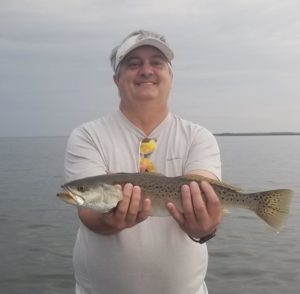 My second charter was to start around 1:30 that afternoon, and after looking at radar and talking with my charter we decided we would be ok, as the rain system was not a very big one and after a couple hours it was gone. I met my second charter at Anclote River park in New Port Richey right on time and although we still had some light drizzle, the skies would soon clear and turn into a beautiful afternoon. We had a decent out going tide so I decided to run north off of Port Richey to a small bay to catch some snook. Once we got set up we could see the water was moving out, and the first bait was hit hard by a nice snook, unfortunately, he was able to get to a dock and break us off. We managed to catch a few small snook and a redfish before we moved on. As the tide got lower the speed of the tide slowed dramatically and the bite was tough for the next few hours. We jumped spot to spot and caught a couple fish in most of the holes but it was slow. We had about two hours left in the trip and the tide was going to start coming in and I was hopeful the bite would turn on. I ran south back the jetty off of Tarpon Springs I had been chased from earlier. The tide had just started in and within a few minutes of seeing the water movement we were in the fish, we had a solid bite of big Gator Trout, Jack Cravelle, and a few snook for the rest of the trip.

We ended the day with a double hookup on some very nice Trout, as we headed back to the dock I was amazed at what gorgeous afternoon the rainy weather had turned in to.