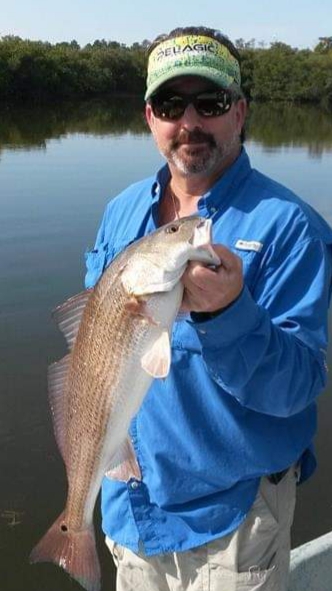 Finally, I arrived at the ramp this morning to see slick flat water and air temperatures in the 60’s. As I backed the boat in I had some time to look around as I was picking my clients up at their house on the water at 9AM. So off I went to see if any of our miracle bait (sardines) had started to show back up yet. The water temperature was still 60 degrees so I wasn’t very optimistic, but I had an hour to burn. I checked two very popular spots and there was not a sign of them, still too cold. So I used the rest of the time to find some new fish as I new with nicer weather the water would be packed soon, and the community holes would all be overloaded. I was able to locate some good numbers of Redfish, Black Drum, and plenty of Snook, which I new would not eat.

As I pulled up to the dock my clients were right on time and off we went. We had another very low negative tide, so I decided that we would do some dock fishing, as they wanted to catch some fish for dinner.  We worked our way deep into the canal system of Gulf Harbors to a dock that always holds drum, and sheephead. The bite started very slow, pretty much like every day this week but when the tide started back in the bite picked up enough to make a few of them eat. After we got dinner we decided to see if any of the Snook I had seen would like a big shrimp, I was not very confident but it was worth a try. Once we got set up I could see the snook laying in the current, but we still had 60 degree water, we drifted shrimp to them but the result was same every drift. The Snook would just move to the side and a smaller redfish or Mangrove snapper would inhale the shrimp. This was good action but we decided to move on to other chances.

By now the sun was up and the air temperature was closing in on 80, it was turning into a beautiful day and I knew what this meant, it would be very crowded from here on out. I started going to check on some of my out of the way spots, but we only had an hour or so before we were done. So we went out a drifted some deep cuts and caught some ladyfish to stretch the line and get some cut bait for tomorrow.

Tomorrow I will be starting a little later and I am hoping the water will warm up enough to find some sardines but I will have shrimp until they show up. Time to wash the boat and prep the rods for tomorrow.