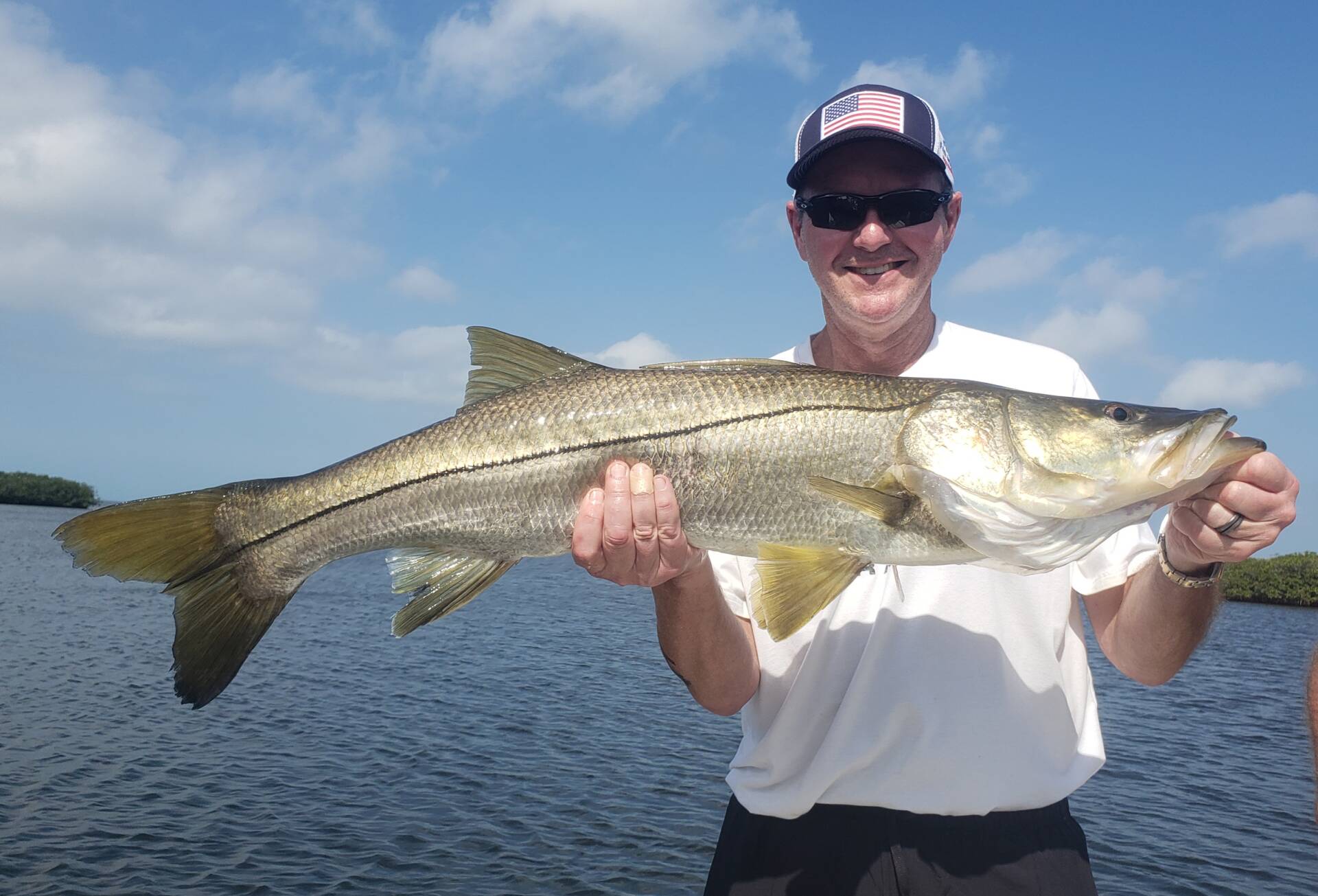 Sometimes as a guide we have to fish when the clients can fish. I had a repeat client today that could only go today, we lucked out with the air temperature, but we did have to deal with a weak tide cycle, and a stiff wind although it was out of the south. This morning started early gathering enough bait for the day, which was a little harder than the past 5 or 6 days, but I got it done and wound up being the marker for all those that slept in. I had my clients meet me at Anclote River Park in New Port Richey and we started our day. The first few spots we still had a trickling outgoing tide so I decided to fish some deeper canals in Gulf Harbors. With the slow water, it was a slow bite, but we managed to get a few small Snook and some very nice Speckled Trout. We close to a favorite dock of mine that usually always holds some nice Mangrove snapper, and they wanted some dinner so we decided to give it a go. We didn’t catch a bunch but it was enough for a good dinner.

I had two saltwater virgins on the boat, and both had heard the stories about how awesome catching a big Snook was. So after the snapper dock, I went ran south to a spot that gets overlooked all the time, I had to wait to go it as there were some bird dogs in the area and I’ve learned a spot like this is valuable. Once we got in and set up I could tell the fish were looking to eat, the first two baits were hit as soon as they hit the water. We landed two decent Snook in the 26-inch range, and then we all heard what sounded like a toilet flushing! Immediately Mike’s drag was SCREAMING, it was a good thing the water was low and the big girl could not get into the mangroves. It took a few minutes and Mike had his trophy at the boat, the Snook measured 39 inches and was 21 inches in girth, she was a true trophy, especially for his first one ever. Dave was next up and when his drag took off we could tell it wasn’t the giant Mike had but at 35 inches it was a great fish! We stayed in the spot for another hour catching Snook, Jacks, and a few Reds but the tide never pushed in hard to really turn them on. We still had an hour or so left and I knew all the community holes had been hit, so I snuck into another spot I haven’t been to since last October. We again got set up and it took ten minutes or so to get the first bite but it was a beautiful Redfish and after that they came one after another. We wound up staying there until it was time to go, and landing 10 or so nice redfish.

I wasn’t expecting much this morning with the tides and conditions we had, but we were able to make it happen. All three guys had slams and we had two trophy Snook, it was a great day.

I have one day left in February and only a couple in March if you want to get on these great fish give me a call, there is a difference. 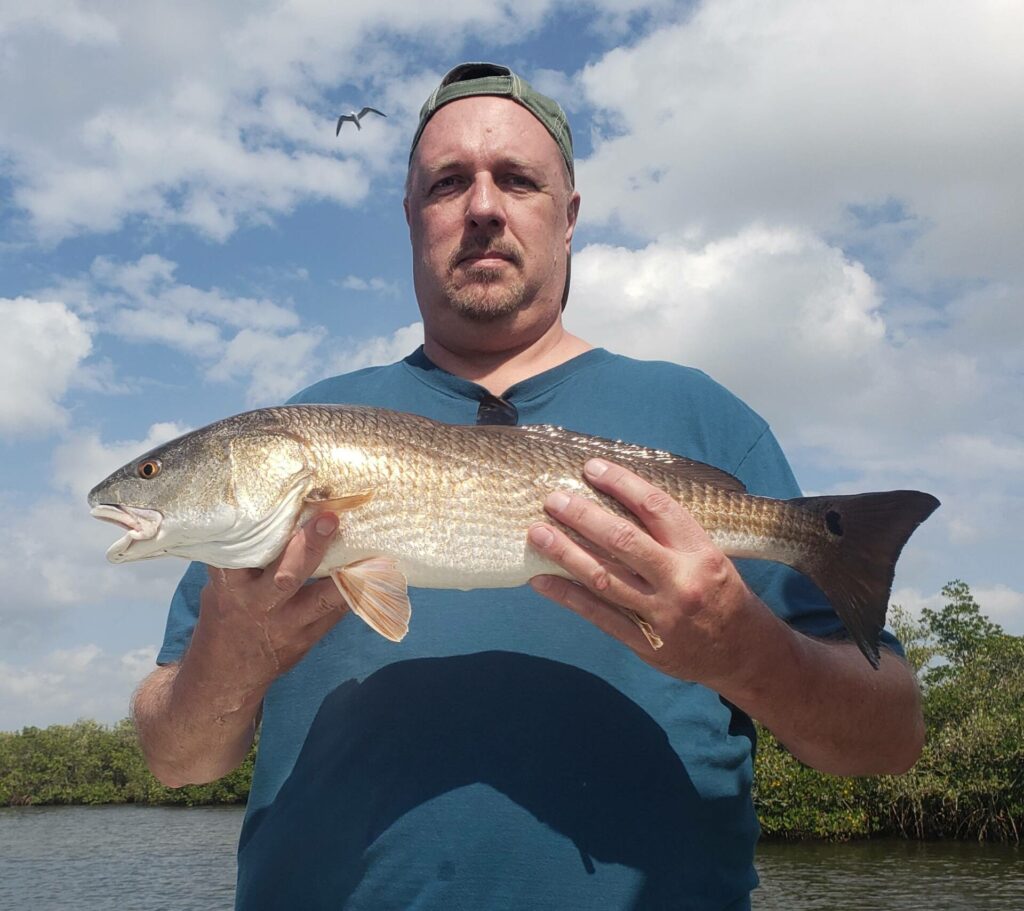 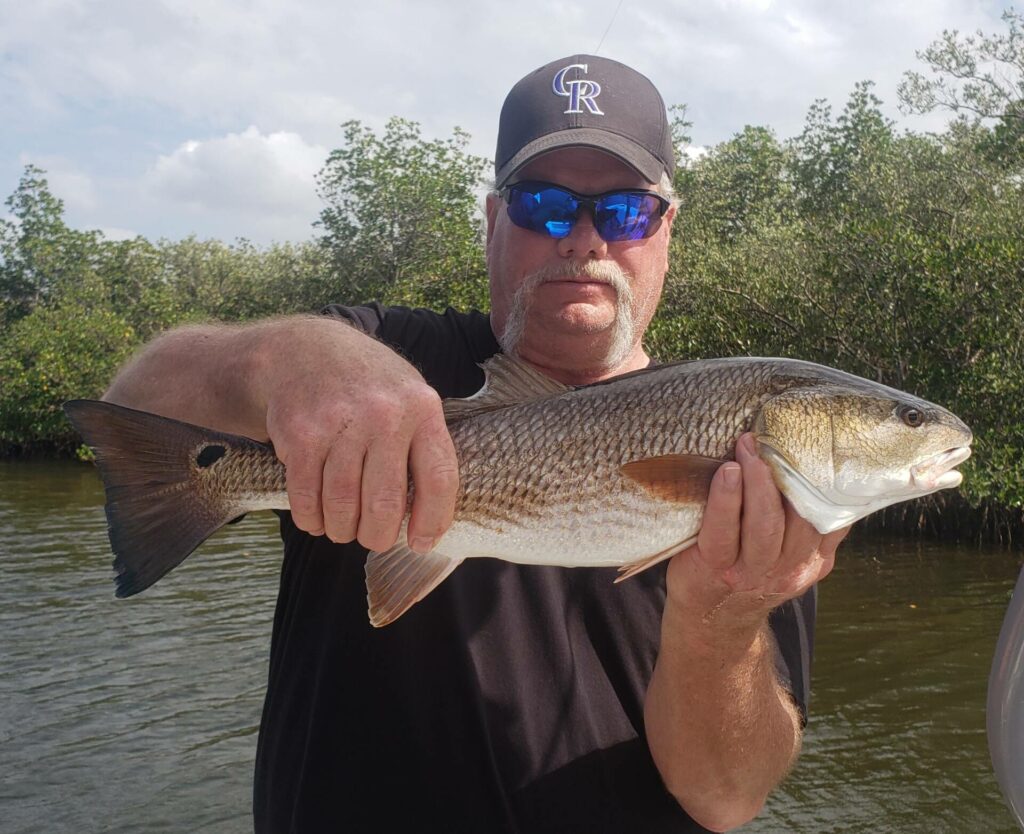 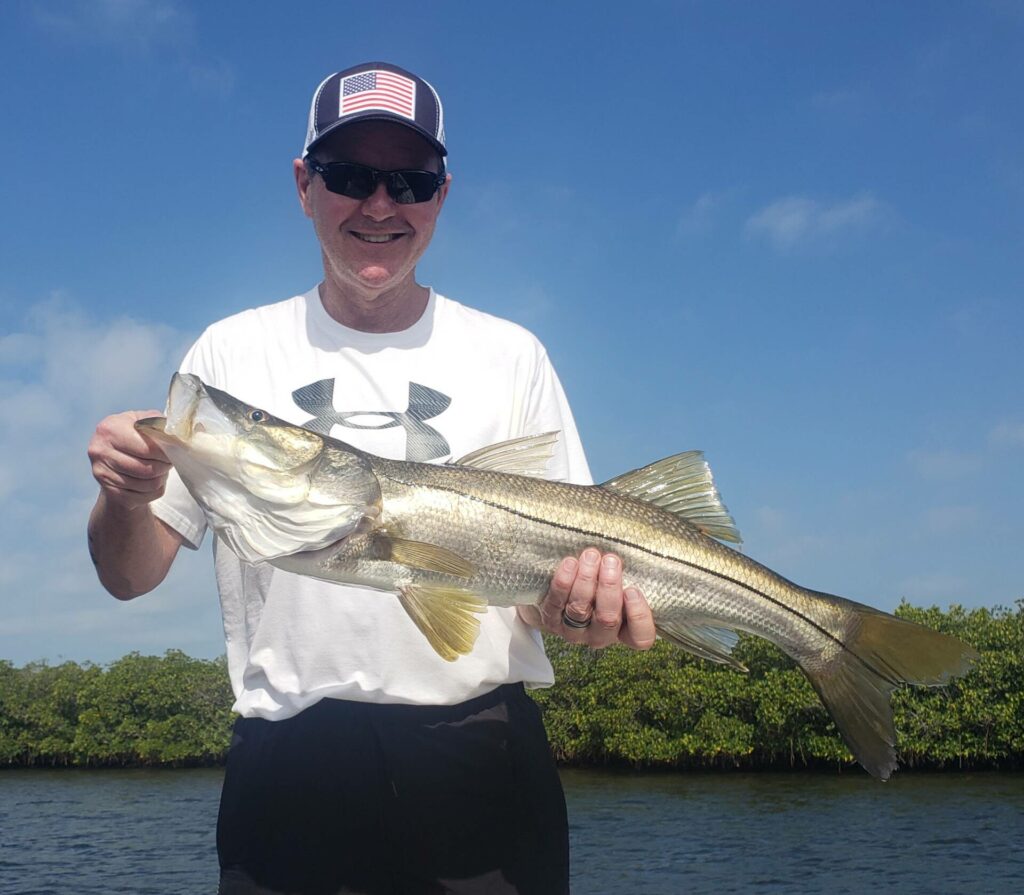 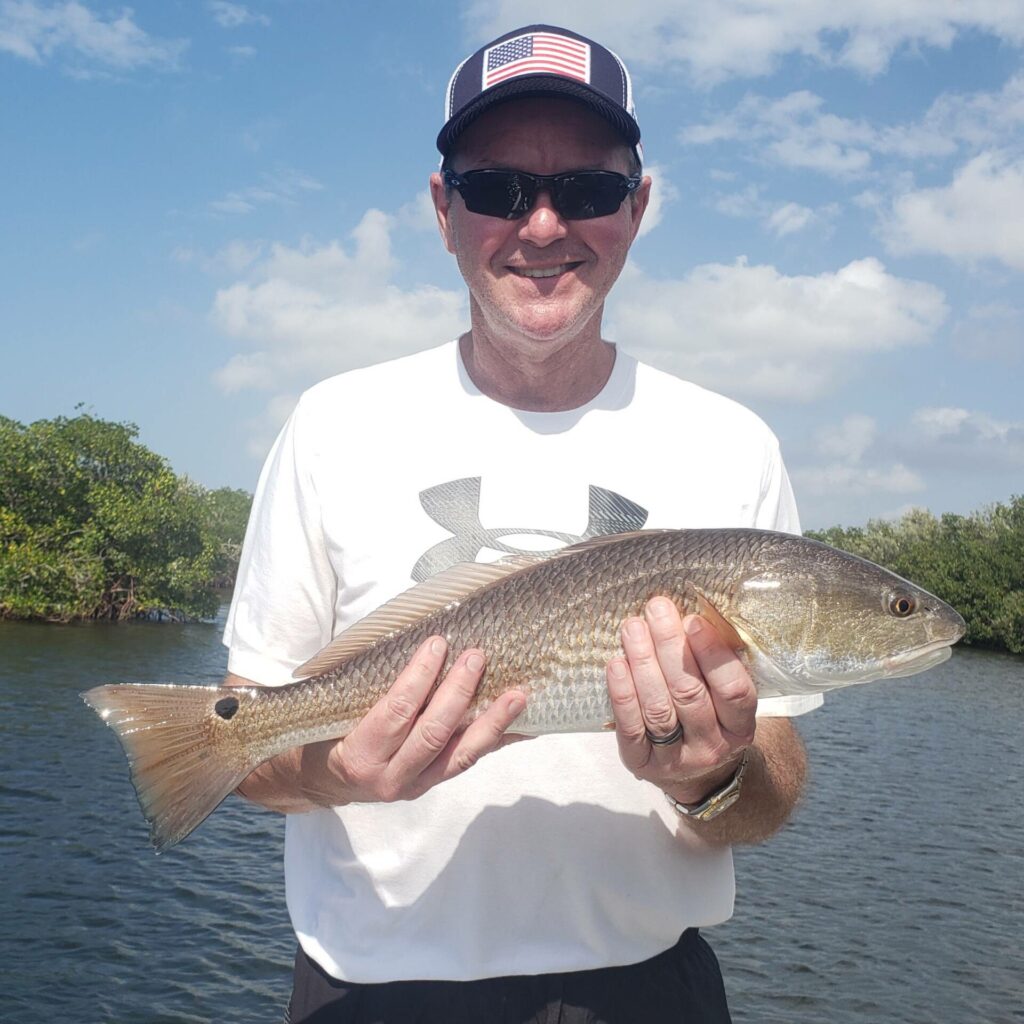 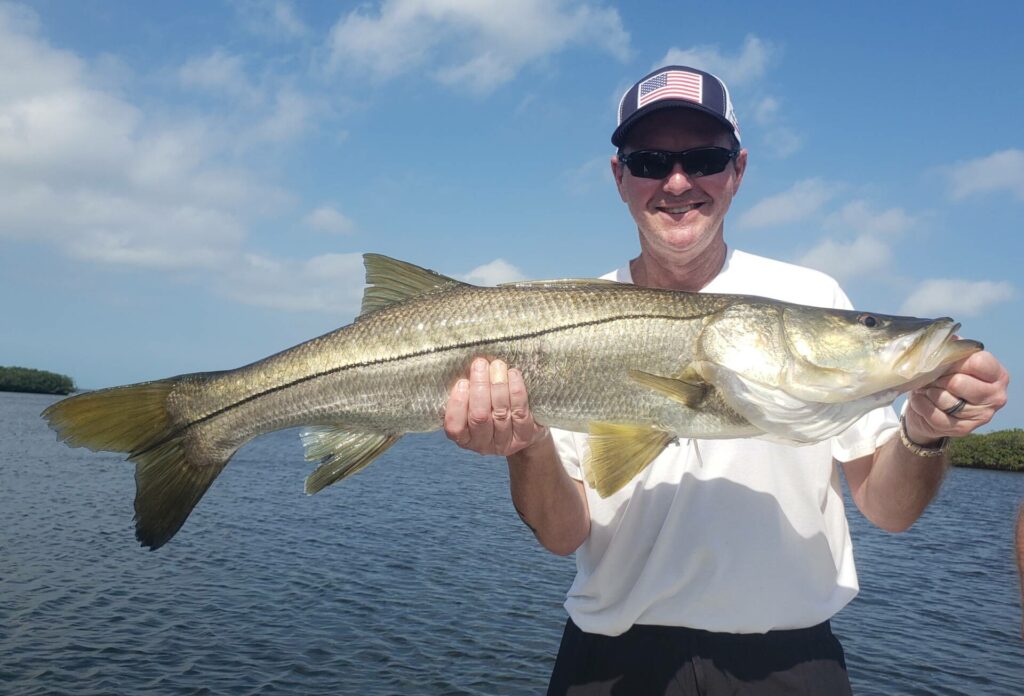