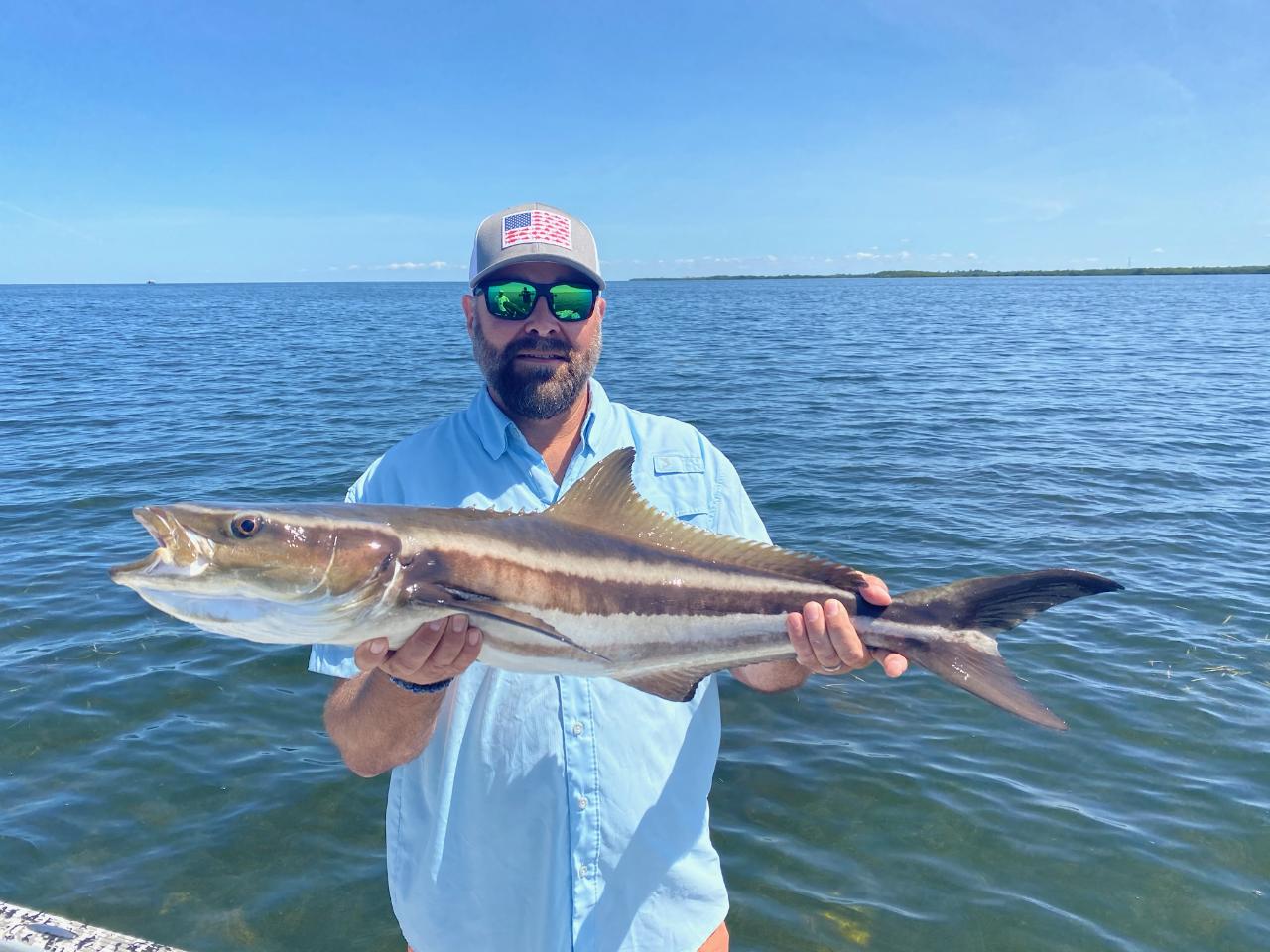 March and April can be very tricky months to fish at times, it can be the best of the year or it can be very tough sometimes on two consecutive days. The main reason for this is because we are still getting cold fronts trying to move through the state, some make it and some don’t. It is never easy to predict what the fish will do after we have had a week or so of warm beautiful weather and then a front comes through and literally the weather turns 180 degrees. That was the case this morning as I got to the ramp to head out for bait. The warm humid air and light south winds were replaced by cool crisp air with a sturdy northwest breeze, not optimal conditions for where I have been catching bait, but the water temperature held up through the night so I was hopeful it would still be there.

As I arrived on the flat it was much choppier and the water was no longer gin clear, but as I started to chum up the bait I could see the flashes of what I was looking for. The first throw was a good one but that would be it, for the next hour every throw would only hold ten or twelve pilchards and a few pinfish. I kind of expected it and even though I had to throw the net several more times than I wanted to, I was able to get enough bait to make it through the day.

As I was heading back to Anclote River Park in New Port Richey to meet my charter, I was wondering what the weather change would do to the fish. One way or another I was going to find out soon enough. We were right on the start of a good incoming tide, so I decided to run south to a rock jetty off of Tarpon Springs that I have been doing very good on big Gator Trout on just this tide. As we pulled in I could see the current was moving around the top of the jetty and through the hole just like we needed it to. The only good thing about a NW wind was it was right at our back for this spot and we could stay off a good ways and make long cast with it. After four or five casts and drifts through the hole we finally connected with a nice Trout, I was slightly worried they may have moved with the change in wind direction but they stayed home. We stayed there for an hour or so and caught a good number of trout, but with limited bait I didn’t want to burn it all here.

While we were catching the trout, the wind had noticeably dropped off and we had almost slick conditions by the time we were ready to move on, something I was glad to see and also very surprised to get.

We left the jetty and ran north, I was going to jump ahead of the tide and go to one of my spots off of Hudson for some snook. As we were running across the shallow flats I saw a Cobia following a big Stingray, Finally. I swung around and my client made a perfect cast, and the Cobia ate the bait immediately. When he got boat side I was able to lip him and he measured 39 inches, a very respectable cobia for sure. We stayed in the area and idled around to see if we could see anymore and boy were we rewarded for our time, we ended up staying on that flat for the rest of the charter catching four more Cobia and seeing at least fifteen or sixteen others, it was the best Cobia day I had had all spring for sure.

I will say I am not easily fooled by my home waters very often, but today got me for sure, as I was not expecting anything like what we experienced. It is a good reason to always be alert and always looking around, that one cobia I saw turned a so so day into on of the best this spring.