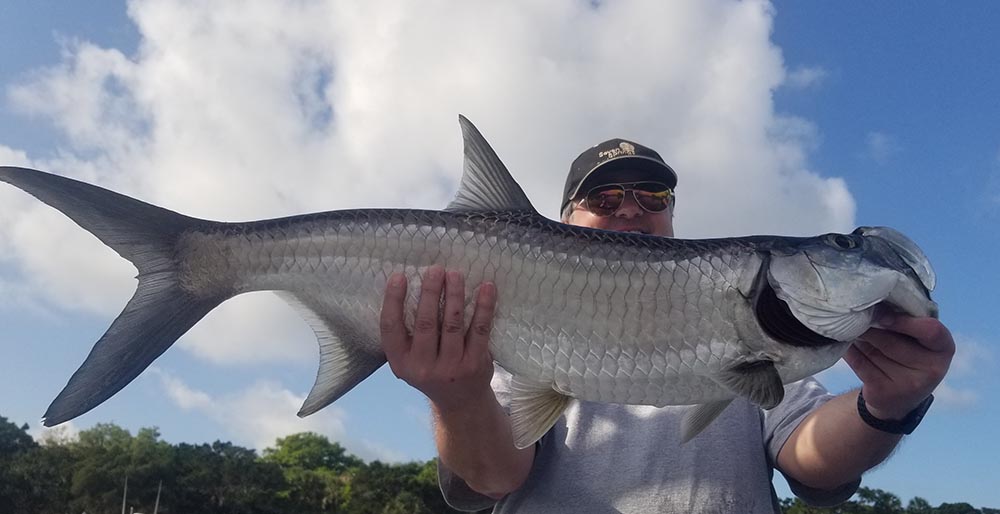 So I decided to forgo the weekend crowds and only fish during the week, I really don’t think I could take the boat ramp follies again this week again, especially when I was part of it last week.

The day started off early with my good friend and client Mike and his brother Jim, we left the dock at 6:30 am to head to the bait flat. We arrived just as it started to crack dawn, by the time I got the chum ready and the net out it was light enough to see if the bait had stuck around through the weekend. Within 5 minutes of starting to chum, the water looked like it was raining in front of the boat there was so much bait. I loaded the net to throw and as the net hit the water it began to sparkle, as I pulled the net over the side I could barley lift it, it was so full. I made one more throw to black out the well and then we off to catch fish.

We were fishing by 7:30am, much earlier than I had anticipated. The tide was going out and would be low at 11am, so we went to fish an oyster bar off of Port Richey that always is a good spot with outgoing water. We arrived and saw plenty of mullet on the bar, we put out the baits but they seemed very sluggish, and when I looked in the live well I seen we had a bunch of bait starting to die. The outgoing water was very low in oxygen and we had to get out of there fast. I decided to go to a deep channel that I had been fishing and catching good fish in, and with the deeper water, I felt the water would be safe for the bait. We arrived at the channel and put baits out, the response was almost immediate, the trout bite was on again, and we caught probably a dozen or so before the bite died off. I made a slight adjustment in boat placement and we were able to get on a short snook bite. Jim was able to catch two very nice snook before the fish quit on us again.

The tide had slowed up so I suggested we go to a spot I had been seeing Juvenile tarpon rolling, and we had the perfect tide for them. It took us 15 minutes to get there and get setup, I threw out some chum and right on queue the silver babies started rolling. Jim made a cast close to them and the bite was almost instant, the young Tarpon immediately broke the surface and was gone just that fast. We hooked two more that would also find away to toss the hook, we were getting ready to leave for another location when one rolled. I made a cast and handed the rod to Jim, the line came tight but there was no jump. After a 5-minute fight we were able to see the silver sides of what we were looking for, Jim had his first Tarpon.

After some photos and a nice release, we now had a slack tide, so we decided to go look for Cobia. The Cobia had been thick over the weekend, but they are fish and after looking for almost 45 minutes we did not see the first one. The tide had started to flow in by now, and I suggested we go to a spot off Hudson that I had been catching good Snook at. We got set up in a trough that had good current flow through it and began to feed the baits down tide, for the next hour we caught several very nice snook. Mike definitely had the fish of the day though, after a great cast we saw the tell tale “hole in the water” that only a giant Snook can make. The battle was a tough one with both angler and fish winning some and losing some, but in the end the big girl got into a dock and the line just wouldn’t hold. Mike did get several nice fish but said he will be back for the big girl.

I know things are crazy right now, but if you are able to get on the water or get out with a guide I would do it. The fishing is on FIRE, Snook, Tarpon, Cobia, Trout, Redfish, and several others are all eating good. Bait is easy and the fishing is good! 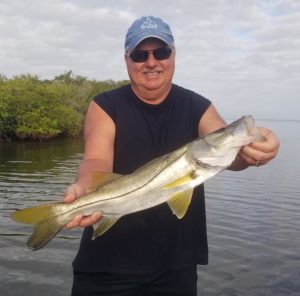 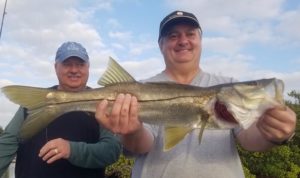 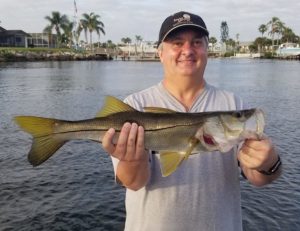 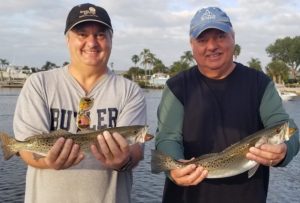