There are some weeks when I sit and wonder where have all the fish that we used to catch gone? It seems like over the past two months the fishing has been just okay, we were catching all the usual suspects just not nearly the numbers of them that we should be. This got me thinking, if the fish are not were they should be they must be somewhere else. So I called a good friend and fellow captain Clay Eavenson and said lets go looking for a day. We loaded up my Banshee Extreme and started running down our coats at 7 am, the water was flat and you could see fish from a mile away. We had traveled about 3 miles to a flat in Sand Bay before we stated to see any signs of life. When we slowed up we could see large wakes from fish pushing all around and away from us. We both instantly though redfish, But it turned out to be an even rarer species than reds lately….Jacks, With the commercial value of Jacks going up they have become a very popular target of the net fishermen and have been decimated by them! the Jacks were so thick just a few years ago that you could not help but catch 20 or 30 every trip, now we are just happy to see a school of them. After playing with them on top-water for a while we decided to go in search of redfish and the other inshore species. We literally ran over 30 miles of shore line and only seen a hand-full of fish, we were both puzzled and could not figure it out. On the way back we decided to take a different rout and think “out of the box” so to say. Lets look in places that don’t receive alot of pressure from boats and fishermen, as we started our journey we still were not seeing many fish. Then it happened, we came around the corner of a sand bar in the middle of nowhere and there they were…one of the biggest schools of redfish I have seen in 4 or 5 years! We backed off them and began throwing top-waters and jigs to them to see if they were going to cooperate with us. My first cast was met with an almost instant blowup, Clay threw his jig in behind mine and we both had fish on. You would have though we had just found the pot of gold at the end of the rainbow as we were both giggling and carrying on about the reds as they all swarmed around the boat chasing there friends with hooks in there mouth. 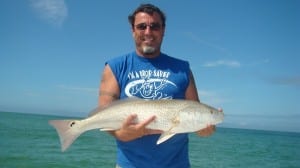 It was funny that between the two of us we have over 50 years of experience on these waters and yet we were able to find fish in a spot neither one of us has fished or even really payed attention to very much. Just like on land things change and people move from one area to another, fish seem to do the same, and when you think you have them figured out there gone. Our “little” school of fish have been good for the past week, letting me catch them on a few charters and even letting Clay and I film an episode of Pro Angler Journal TV with them. This introduction has turned into more of a story than planned but it was just so cool to see how when you think a little different you will get different results!

As for the fishing  the past week has been very good, Redfish and lots of big gator trout are moving in for the Fall feast. They seem to be best on the incoming tide when the cool offshore water stimulates there need to feed. The trout have been mainly on any hard structure, oyster bars, rock jetties and hard sand channel edges. If you move out into the passes you will find all the Spanish macks you want, and just offshore 3 miles or so look for any hard bottom and the Kingfish wont be far away. 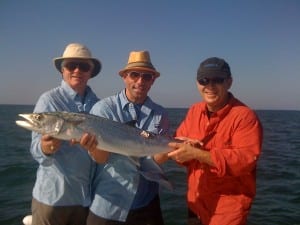 I always look at Fall as our second spring, the main difference is everything is in reverse, so if you want to catch fish they are there, just look to areas that don’t have boats and fishermen trolling or running through them constantly…who would want to live in the city!!