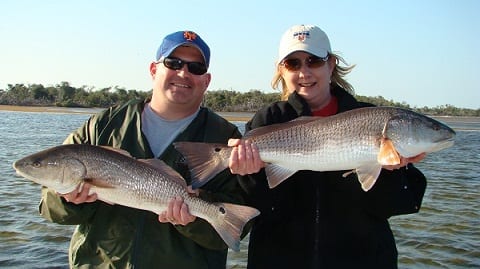 Redfish Description: Known as a fish that will not quit, redfish can be absolute brutes. And as such, they have become one of the most sought after fish in the shallows of Florida. Since their protection in the mid 1980’s redfish numbers have proliferated and are especially abundant and large on the west central Florida coastline. Redfish have a coppery bronze color with a tinge of red, color will vary depending on water clarity. Normally redfish have one spot on the base of their tails but often there are several or many spots.

Spring time: (Excellent) The months of March, April, and May are good months to catch redfish on the west coast of Florida. They are starting to form into schools that they will stay in for the rest of the summer and fall. We will fish for them around the mouths of our rivers and canals, as they make there way out of deeper warm water to start to search for the newly arrived sardines.

Summer Time: (Very Good) The months of June, July, and August are also good months to catch redfish on Florida’s west coast. The redfish will be well on there way to any of our barrier island looking to forage all the way. We will find them in large schools from the mainland all the way out to the islands, we will also find them using the schools of mullet as cover from there prey. This is a good time to look to the middle of our grass flats for the sand holes, the redfish will use these holes as ambush points as the wait for bait-fish to swim by.

Fall: (Excellent) The months of September, October, and November are probably the best months for redfishing on the west coast of Florida. This is when they begin there spawning cycle, and the large offshore schools move inshore to meet the large schools that have been forming since the spring. During this time of year you could find redfish anywhere from the mainland mangroves to the beaches on the barrier islands, the schools will move with the tide and the bait. In the fall you will find the largest schools of the year and they are usually very aggressive as they are trying to fatten up for the spawn.

Winter: (Very Good) The  months of December, January, and February are my favorite time to fish for redfish on our coast. During the winter months we experience the lowest water of the year. They are called negative low tides and at times our grass flats look like deserts. This low water forces all the redfish and everything else on the flat into the deeper holes and troughs on the flats. With specialized equipment like airboats and my Ranger Banshee Extreme, we can access these holes and catch the fish that are in them. This is the best time of year to pursue the redfish with light spinning gear and artificial lures, and to catch them  with fly-fishing gear.