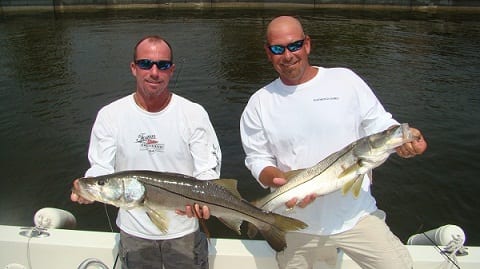 Snook Description: Snook are inshore fish with an attitude. They are generally a golden yellow in color with a dark black lateral line (stripe) running the length of their body. Their mouth is similar to a large mouth bass’ size & shape, yet their gills are razon sharp so watch out when handling these guys. Snook are revered as one of the most prestigious fish to catch, partly because they tend to be finicky about how and when they will approach a presented bait but mostly because of their fighting tactics (which seem unfair). But if you want to tangle with a fish thats’ bound and determined to give you a brutal fight… SNOOK is your fish.

Spring Time: (Excellent) The Months of March, April, and May are probably the best time of year to catch snook on the west coast of Florida. They are beginning to come out of there winter hideouts, where they have been for the winter, and they are looking to fatten up quickly. Live bait is king during the spring run, the snook are getting ready to move out to the beaches to spawn in the summer months. The mouths of the rivers and all the deep water canals will have snook looking for an easy meal.

Summer Time: (Very Good) The months of June, July, and August are very good month to fish for snook as they are in large schools on almost every beach on the west coast. The summer is when our Snook spawn and they gather in large numbers along the beaches until the new and full moon each month. Then they move to the closest pass and begin to spawn on the outgoing tide. While they are on the beaches they are very easy targets and will eat just about anything that is thrown in there direction, live or artificial.

Fall: (Very Good) During the months of September, October, and November the snook will be in transition from the beach back to the mainland. There will still be a few snook on the beaches but most will be found inside the islands on the flats or on any type of structure heading to the mainland ( dock, oyster-bars, rock jetties). They will be aggressive on almost any tide that has good moving water, so fishing around the full and new moon becomes a little more important. The Snook will be getting ready for the winter and not feeding much so they will pack on the fat while the bait-fish are still around.

Winter: (Average) The months of December, January, and February are probably the toughest months to catch Snook. Snook are a subtropical species and the cold water makes there metabolism slow way down, along with that there apetite also slows way down. That dose not mean you cant catch them, you just have to work harder and plan to fish the best tides. The Snook move to the deepest warmest water they can find, usually up the rivers and in the deepest canals. This is where we target them in the winter, large live shrimp fished in the bends of the rivers or in the deepest canal with muddy bottoms are usually the best bet.