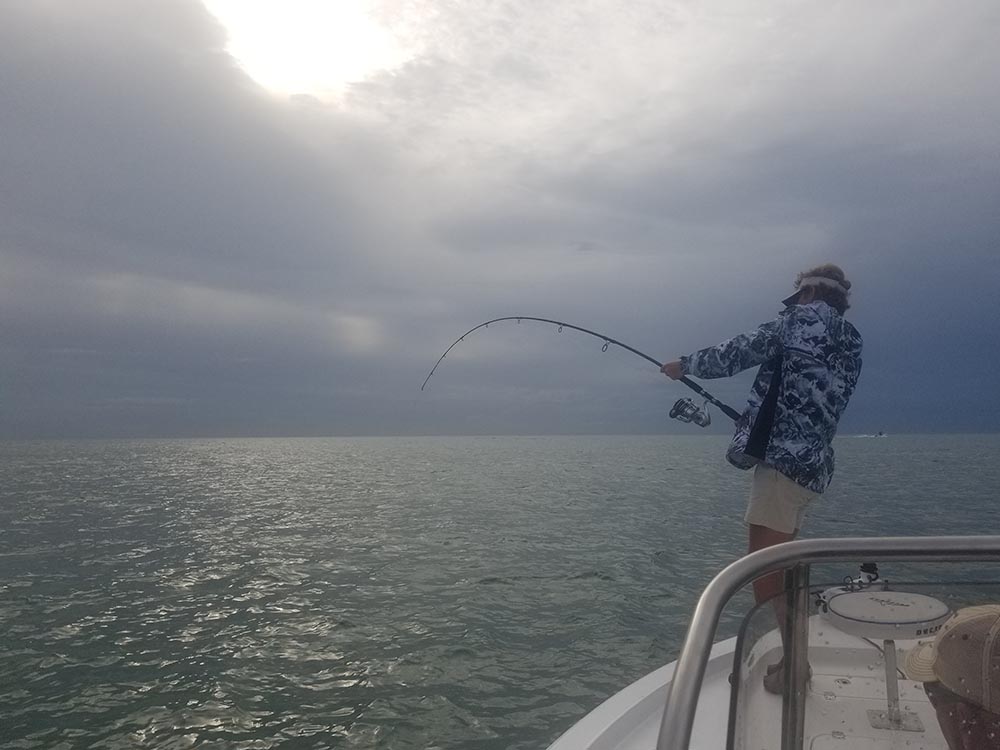 We have made it into June and the midpoint of the Boca Grande tarpon-spawning season.  There have been literally thousands of Tarpon in Boca Grande this year, and with the full moon this week we have more on the way. The crowds have continued to thin out as several guides and recreational fishermen have wrapped up their vacations and gone home.

In some ways, they left just in time as the weather this week turned ugly with a Tropical storm in the gulf we had plenty of rain and wind. But in some ways they missed it, they could have been treating their clients to some of the best fishing we have had this season. As the storm was developing we were treated to some very low barometric pressures, making the Tarpon go haywire. With the pressure so low the entire mass of Boca Grande tarpon moved out of the deep confines of Boca Grande pass to the nearby beaches of Gasparilla Island. And with the full moon, we also had a massive school of Tarpon move south from Sarasota down the beaches to us. It was one the largest congregations of fish that I have ever seen, there had to be at least 30,000 tarpon on the beach that morning. And the bite was insane, both morning and afternoon trips were outstanding as we had double-digit hookups during both.

Nobody is sure why every Tarpon moved to the beach but it was nice for the first day, after the first day the pass fisherman had no choice but to come to the beach. Unfortunately, the edict on the beach and in the pass are completely different, not to complain, but I’m not sure what universe you can drive up to a school of fish with your outboard running and still expect them to bite. Needless to say it was evident who the Tarpon fishermen were and who chase schools around a pass.

Even amongst all the motors, there were enough fish on the beach that you could find fish that would eat without any problem.

Although all the trips this week were very good one, in particular, stood out in my memory. It was Friday mornings trip, and by then the entire fleet had finally found the fish, so we started early and were on the beach at daybreak. As we idled down the beach we found a nice school of tarpon slow-rolling and looking very happy, we launched a couple of crabs into them and immediately we were hook up. The tarpon instantly took flight and put on a show like no other, unfortunately, the acrobatics drew some unwanted attention and by the time we landed our fish there were 3 boats that had moved in on our school. As I looked around I could see a steady stream of boats coming to the beach, it was obvious the tarpon had not returned to the pass. So instead of trying to fish around all that we decided to take a chance and leave the big groups to find our own, and boy did it pay off. We found a school of 100 tarpon miles from anyone all by themselves looking very happy! The first cast was tight before I could make the second cast, but we were still within cast distance of the school. We put the second crab in them and it was also instantly eaten, after we landed that double we could still see the school rolling gently to our south. It was defiantly a magical group of fish, after the first double we moved in and doubled up 2 more time and on the last approach we hooked our fourth double from them but one finally came off. The school yielded 9 hooked fish and 6 to the boat in less than 2 hours, to say the least it was awesome!

It is amazing how good the fishing can be if the Tarpon are approached the right way, perhaps if beach fishing is not your forte just sit back and observe for a while it is really not that hard, but one mistake will mess up a school of fish for everyone.

June is a great month for Tarpon and with a lot less guides here it is going to be a banner month, its time to go! 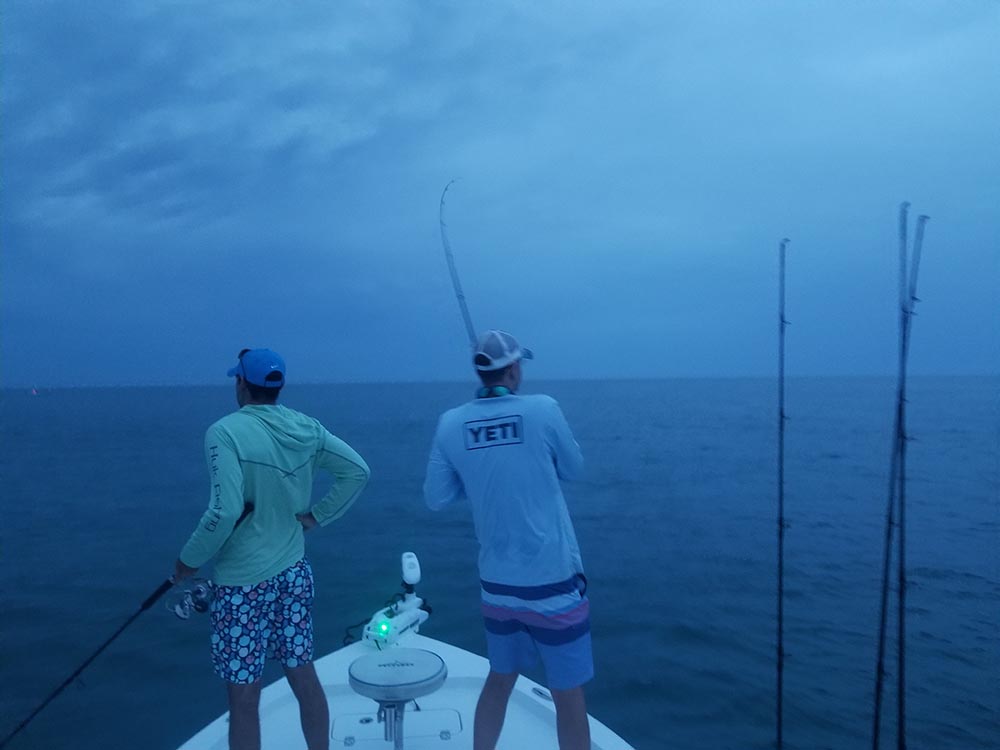 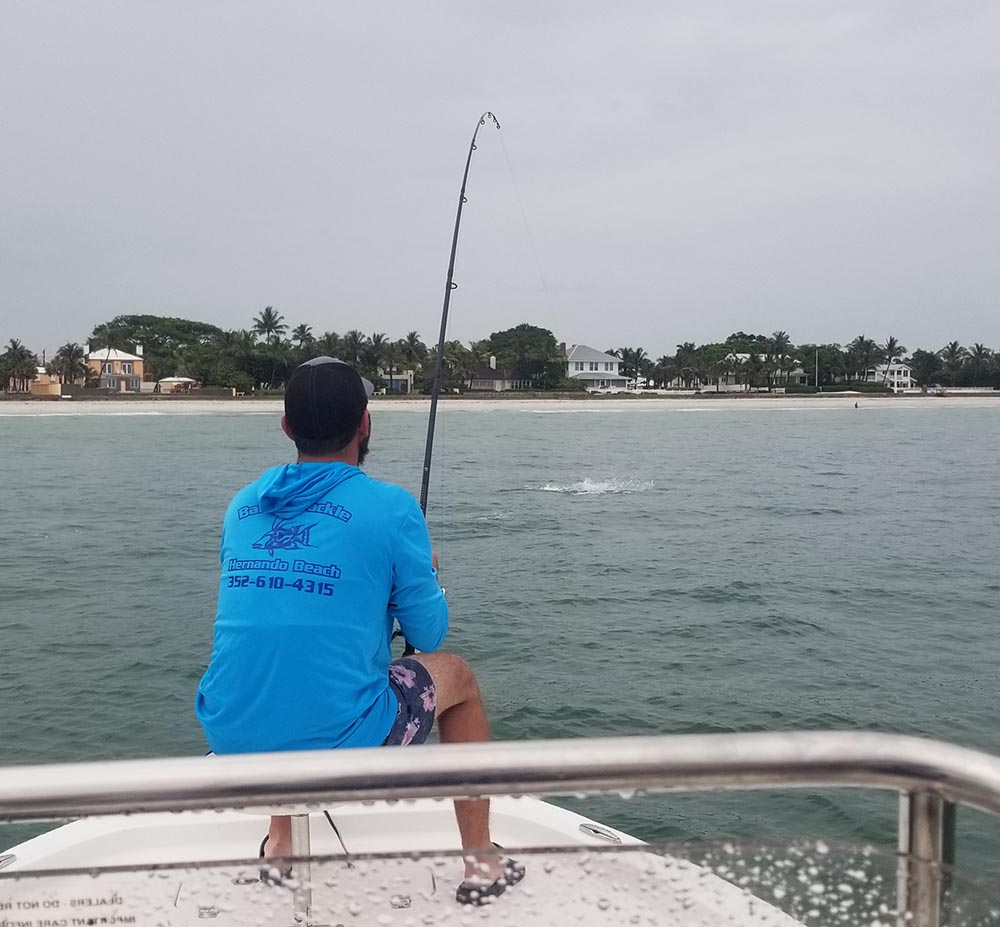 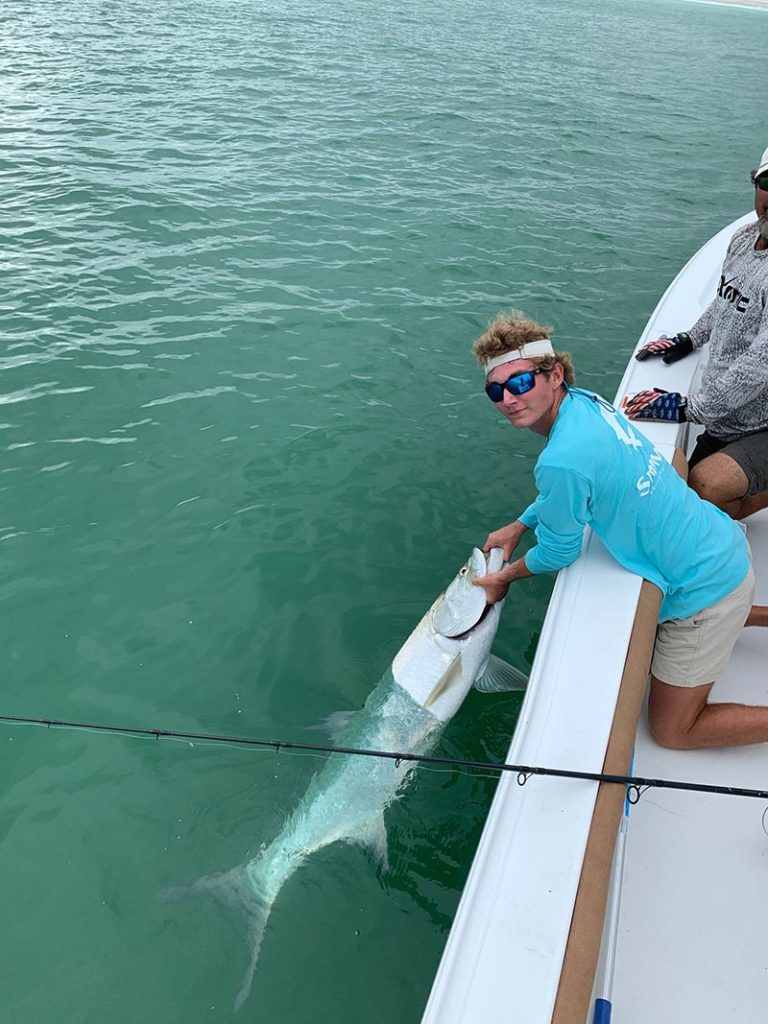 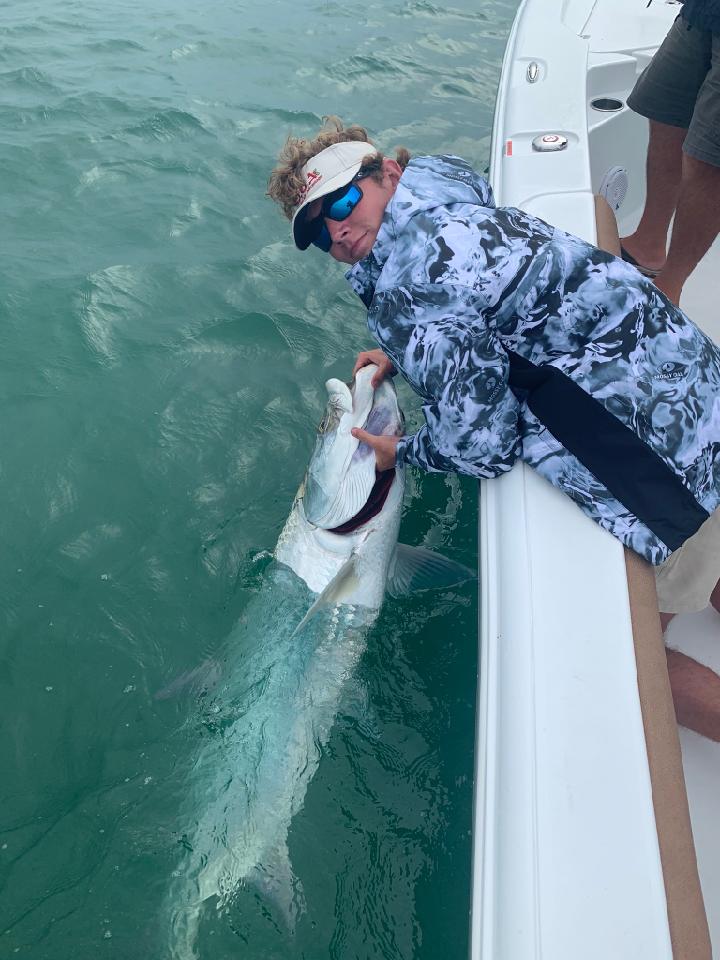 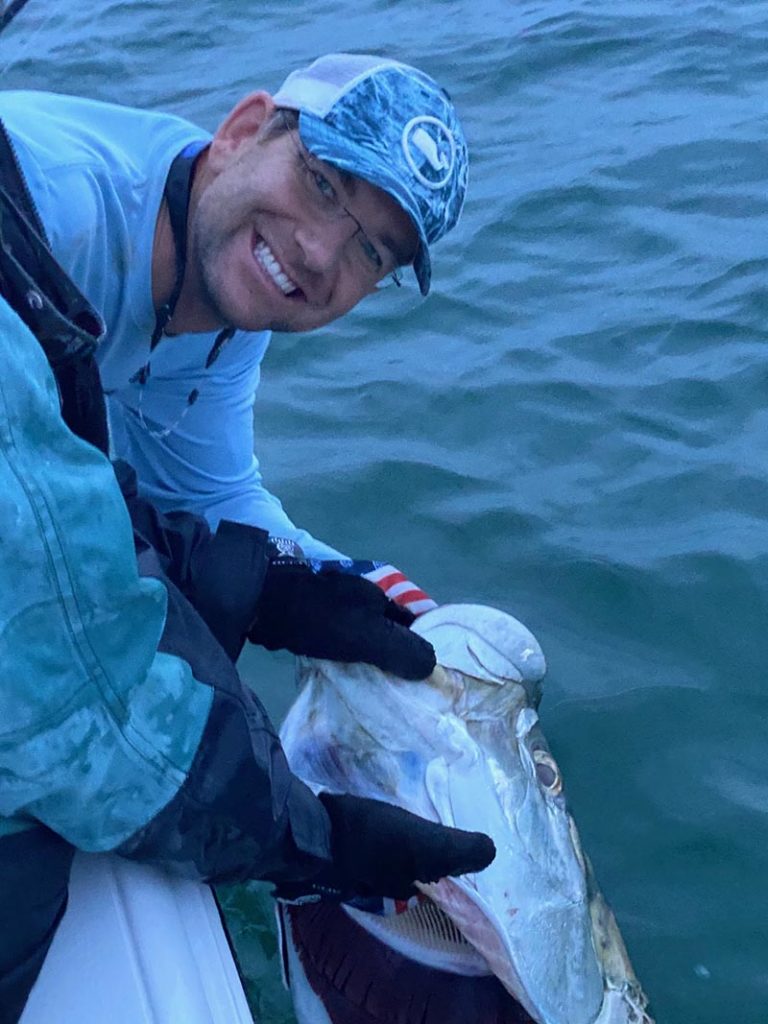 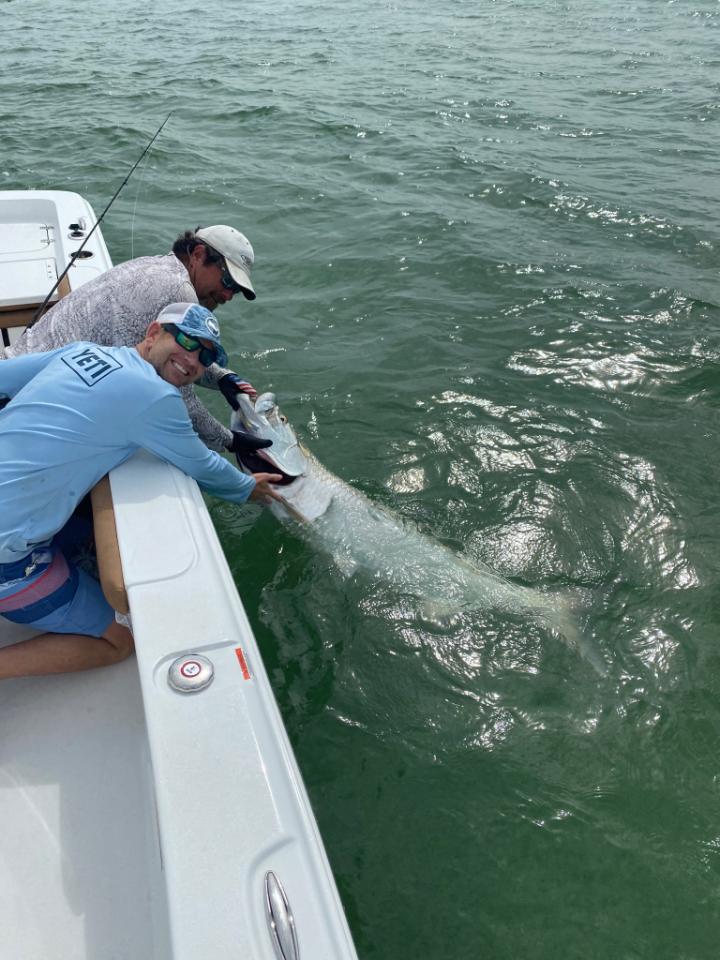