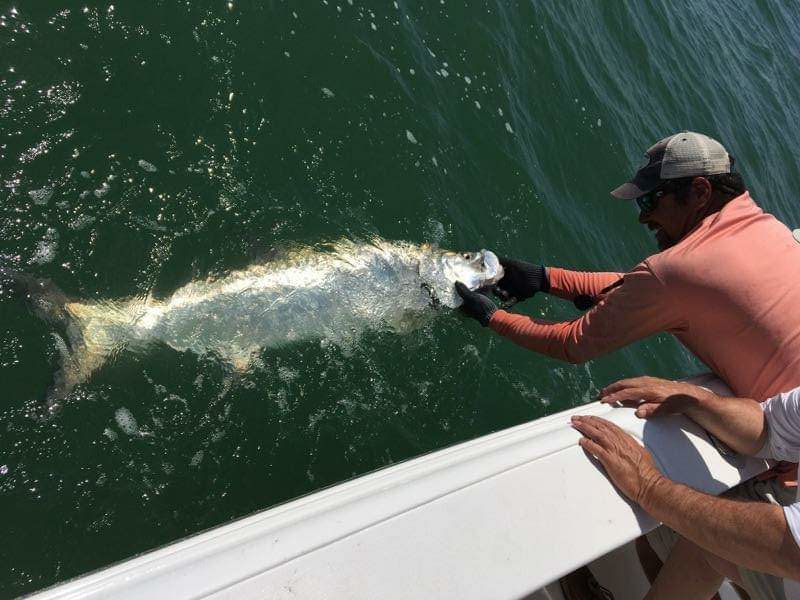 With three full weeks under my belt on this year’s tarpon season in Boca Grande has finally started to get some normalcy to it. The fish have finally left the pass and moved out on to the surrounding beaches. It is nice to see happy fish rolling up and down the beach with nobody driving over them and dropping balls of lead on them.

Again the days in Boca Grande start early with a 6am pick up we are on the beach before daylight looking for the telltale swirls and slicks of happy schools of fish. Today I was fishing my longest tenured client and good friend, we have literally been fishing together since 1999.

Apparently the holiday weekend was starting today, as we drove past Boca Grande pass it was already full of boats zipping around trying to get on top of the fish. Anyway we moved on down the beach in search of the Tarpon. It wasn’t long before we spotted some rolling fish, I put the trolling motor in the water and moved us into position for a cast. The first crab hit on the edge of where the fish were rolling and as the crab sank it was inhaled by a hungry Tarpon, as soon as the line came tight a silver missile erupted through the surface and started peeling drag. It took about 20 minutes to get the Tarpon boat side for a quick picture and then revive her and off she swam.

The sun was up and we could now see just how big the school of Tarpon actually was, and it was no problem getting back in position for another shot at them. The Tarpon were still rolling slowly which is always a good sign, we fired two crabs into the mass of fish and were again rewarded with a hungry Tarpon that wanted nothing to do with his chosen breakfast. Again the fish did everything it could to lose us but the Owner hook stayed put and the Tarpon was boat side for another quick picture and release. 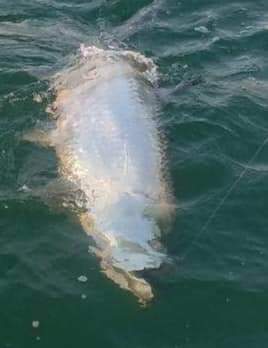 By now there were a few boats starting to migrate down the beach and our school had been discovered, so we decided to move north up the beach and look for more Tarpon rolling happily along. It didn’t take to long before we saw a large area of muddy water, as we approached it the side scan on my Simrad showed me that there was a school of Tarpon making the mud. We again set up and put crabs into the area, it took a few minutes but one of the lines came tight and once again we were fighting a silver king. This one was a little slicker than the first two and was able to throw the hook back at us after three spectacular jumps.

The rest of the morning went very similar to the first hour up until 10am, when it seemed as if the dinner bell quit ringing. After throwing crabs at several different schools with no takers we decided it was time for lunch and called it a day.

It is very nice to have fish on the beach and not have to deal with the traffic in the ditch.