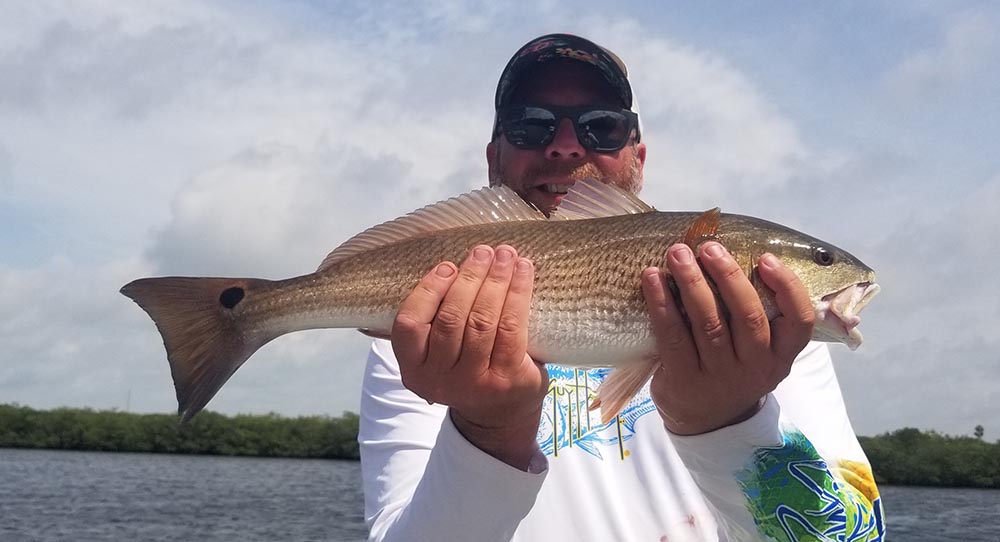 Today was the day we finally got a weather change, a small front is going to pass through the state tonight and ahead of it the clouds thickened and the south wind blew. The good thing is, we are on a very weak tide schedule for a few days so the 25mph south wind was welcome. The reason why is the south wind will push the water in, kind of like a extra push on the incoming tide.

I left the dock to go get bait at 6:30am this morning, the wind was starting to pick up so I wasn’t sure if the bait would be affected. I arrived at the flat and started to chum, I could see the water was flowing out at a good pace so I was optimistic. It took about 10 minutes to start seeing the telltale flashes of the pilchards I was hoping to see. The first throw brought in 150 of the silver baits, I chummed a little more and with one more throw I was done with bait.

I had set my charter up to meet me at Anclote River Park in Tarpon Springs at 8am. We had 3 more hours of outgoing tide, but with the strong south wind I knew it wouldn’t be very strong. I decided to fish a small cut that funneled the water down to create some flow, we pulled up and set the baits in the current and immediately hooked a couple snook. Nothing big but solid fish that jumped and pulled drag, we stayed there for about a half hour and caught a few more Snook, and some Jack Cravelle. We decided to move to the channel in New Port Richey that I had been catching a bunch of trout on the low tides. As we pulled up the water was hardly moving and I wasn’t sure if we were going to get anything, I threw out a good bunch of chum and we saw a few pops. The first two baits both turned into Trout but then the bite quit, I chummed again and we caught a couple more. The chumming was working but I didn’t want to use all the bait chumming Trout, so we moved on. I had planned on doing some Cobia fishing on the low tide but with the gusty wind there was no way we could see the stingrays that the Cobia follow. So we aborted that plan and I mentioned that we could go and play with the baby Tarpon till the tide stops and turns around. The decision was a quick one and once we got set up it only took a couple of minutes to see the little guys rolling in the chum, we put out some baits and had one on within a few minutes. But just like Tarpon do he gave us a spectacular jump and threw the hook back at us. We kept seeing Tarpon roll but could only get one more bite, and he didn’t stay hooked up very long, but it was fun seeing them fly and listening to the drag.

The tide had turned and started in and we had about an hour left before we were done, so I took them to a small cove that has had some big snook in it. As we pulled in the water was moving in at a good pace, I threw a few chummers out and the snook responded, we dropped the baits back to them and the first one was inhaled by a very large snook. She made her run to the mangroves and we got her turned the first time, she launched from the water and we could see she was a substantial fish. Unfortunately, there was no stopping the second run, and she was able to reach the safety of the mangroves and win her freedom. We were able to land a smaller snook and a redfish but the bite slowed and it was time to head in.

This front is actually coming in at a good time, as it will cool our nights and help keeping the water temperature right in the mid 70s and keeping the tremendous bite we are experiencing going. 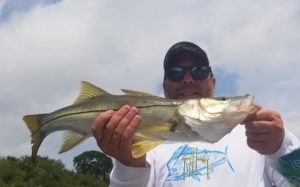 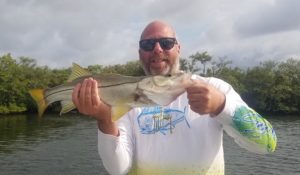 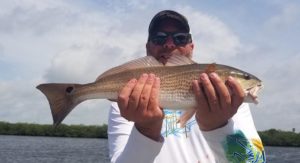