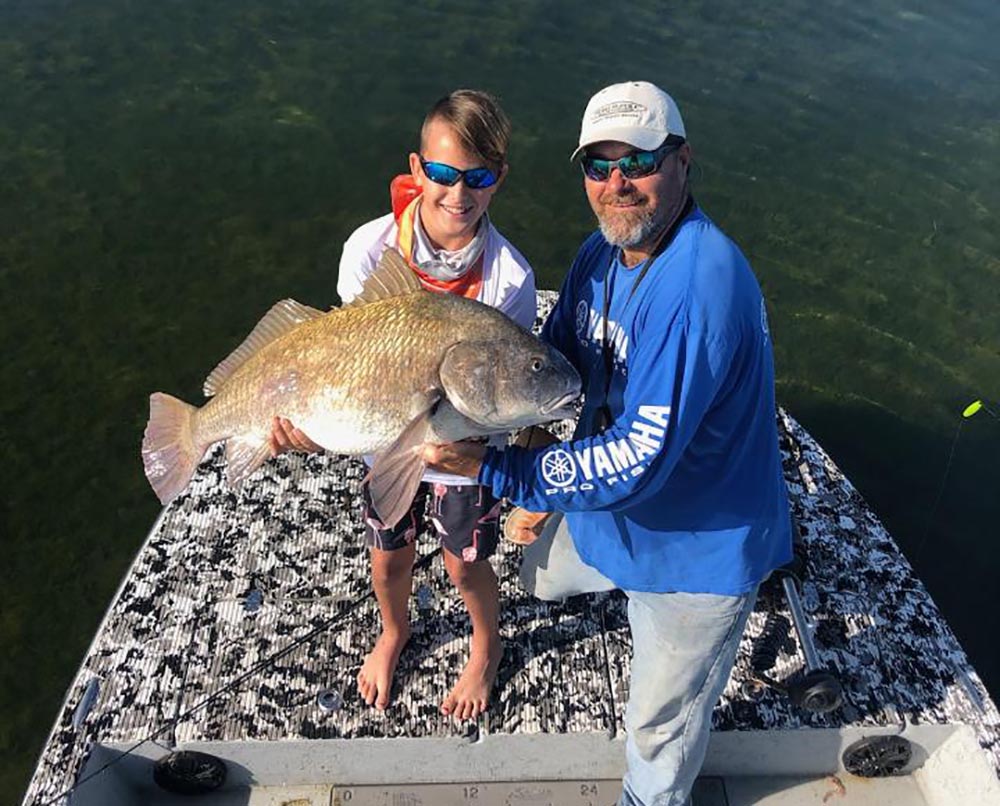 I’ve always heard “Be careful what you wish for”,  well I have been wishing for some warm weather and light winds. And today I got it, slick flat water and 68-degree air temperature. When I dropped the boat in the water it was 65 degrees, today was looking up for sure. My plan was to go and see if our supply of pilchards had returned, as I left the ramp I was the only boat there, I was optimistically hopeful about the crowds.

I put the boat on top and cruised to the bait flat, it was literally like a mirror. As I slowed down I was again the only one in sight, could it really be happening like this, time would tell. Now the only thing I had to hope for was to see the flash of silver in the chum, and to my delight, it only took about 5 minutes before that happened. The first throw had about 50 of the magical crickets in it and I was happy I would not spend my morning throwing the net over and over. As I was cleaning the boat up to get ready to meet my charter, the first boat finally showed up, but it would not be the last! 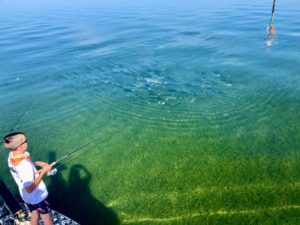 I left the flat and worked back to the dock to meet my charter for the day, Eric Is a great client and friend and I was looking forward to today’s trip. We were set up to meet at 9am and they were right on time. We loaded up and left the dock, the group was very excited to see that I had filled the well with shiny pilchards. Our first stop was a springtime spot that always loaded up with big gator trout when the conditions are right. Unfortunately, everything was right except for the water temperatures, we are still fighting cold water in a lot of places, and this was one of them. We gave it 20 minutes or so and decided to move back inland to find some warm water, as we were running across the flat I saw a very large school of very large fish. As we spun around and dropped the trolling motor I could see it was a bunch of BIG black drum, about 200 of them. Luckily I still had some shrimp in the live well, and while its not their favorite food, we were able to get 10 year old Hoog hooked up to about a 45 pounder that wore him out. We chased the school of drum around for about an hour and could not stay attached to another one. But it was very cool to see them roaming around the flat. We left the Drum to go get some Snook and Trout, we were able to get set up on a rock pile that was loaded with trout, but only a few of them were hungry. I was able to get everyone a few trout and off we went to find some snook. We decided to fish a dock with a lot of current and got set up and caught them two at a time until they decided enough was enough. We ended the day in a small creek where we could see Snook and Redfish swimming around, we set up and drifted some pilchards to them. The bites were almost immediately and after 4 or 5 of both species we decided to call it a day.

One thing is for sure, the empty boat ramps of the beginning of the week are only a memory. I do not want the cold and wind back, but maybe just enough to keep the boat traffic low. One thing to remember, we do have loads of bait but if the fish aren’t ready to eat it they wont, so you better have what they want. Time to load the boat and get it ready for tomorrow’s trip.