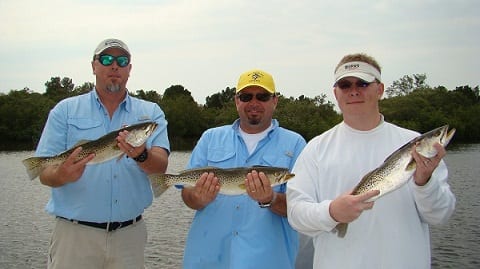 Trout Description: West Central Florida is home to the largest population of Speckled Sea Trout in Florida. After entanglement netting was constitutionally banned in Florida, seatrout have rebounded back to healthy numbers and sizes that we haven’t seen since the early 1980’s. Seatrout are an aggressive fish that will strike anything from topwater artificials, spoons, jigs, live-bait and various fly patterns. The Speckled Trout is the most fished for fish in our waters and for good reason.

Spring Time: (Excellent) The months of March, April, and May are the best months of the year to catch good numbers of big gator Trout. This is the time when we catch Speckled Trout up to 6 pounds on alot of charters. The Trout will be at the beginning of there spawning cycle and start to gather in big schools along any kind of hard structure (oyster bars, rock jetties), they are very aggressive and can be taken on both live bait and artificials. During this time of year you can pull up to one spot and catch as many as 75 trout in one hole.

Summer Time: (Good) During the months of June, July, and August the Speckled Trout look for cooler water, which means they move offshore a little ways. This time of year we catch them over deeper grass flats, usually in 8 to 10 feet of water. The size of our Trout is smaller on average in the summer than any other time, but once you find them you can still catch them until you are tired of them. We are drifting over the grass with the wind and current, so we usually catch them on artificals this time of year.

Fall:( Very Good) The months of September, October, and November are good months to catch Trout, however the size is still on the smaller side. You can catch some good ones and several fish will be over the 15 inch minimum, but you will have the smaller fish to deal with also. This is the time when the Speckled Trout will start to move back into the shallows looking for food, the beaches will start to hold good numbers of them and live bait will be the way to go if you want to catch the larger fish.

Winter: (Excellent) The months of December, January, and February are my favorite time to catch Speckled Trout. They move all the way up on the flats and start to use the sand hole and deeper troughs on the flat as places to ambush prey. During the winter months the bigger fish start to feed on topwaters very well along with most other artificials. We have the lowest water of the year in the winter and with the help of my Banshee Extreme we  will glide along the shallow flats and see large numbers of Trout in most of the holes, this is the time when you can do alot of sight casting to them.